The Kwahadi and The Battle of Adobe Walls 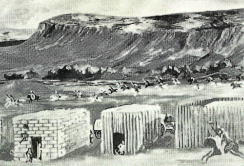 In the spring of 1874, A.C. "Charlie" Myers packed up his mercantile business in Kansas and followed buffalo hunters, such as Josiah Wright Mooar, Billy Dixon and William Barclay "Bat" Masterson to the Texas Panhandle. The move was one of financial necessity as there were few buffalo remaining in Kansas by late 1873. A seasoned businessman, Myers understood the need for a supply post that could solve the hunter's problems of traversing the 150 mile trek between Texas and Kansas to re-supply their camps and also dispose of their hides. Myers built one of four "soddies" that eventually comprised Adobe Walls. (A soddie was a line of timber logs placed upright in a trench and then packed with sod.)
The "new" Adobe Walls was located about a mile from the Adobe Wall's ruins where Kit Carson and three hundred men battled a thousand Indians in 1864.
The June 1874 battle of Adobe Walls was a motivating factor in General Phillip H. Sheridan's July 27, 1874 "solution" sent to President Ulysses Simpson Grant. Sheridan's plan gave the Southern Plains bands seven days to enroll at their respective agencies, declare themselves friendly, and answer unannounced roll calls. Any members who did not present themselves to the agencies by August 3, 1874 would be considered as hostile and hunted down and killed.

The Kwahadi, "Antelopes," were also known by kwah-heeher kennuh, Kwahada, Quahadi, and by other bands as "Sun-shades-on-their-backs" for their habit of using buffalo-hide parasols when riding on the staked plains. The Kwahadi were the most remote and fierce of the Comanche bands. The Kwahadi avoided many of the epidemic disasters that befell other bands simply by their remoteness and refusal to have any dealings with whites.

Parra-O-Coom, "Bull Bear," was a Kwahadi leader of great celebrity. Parra-O-Coom was best known for never signing a treaty with whites and is said to have repeatedly proclaimed he would never do so until the horse soldiers came to the Staked Plains and "whooped him." Parra-O-Coom contracted pneumonia during the planning of the 1874 Battle of Adobe Walls. Due to the illness, Quanah Parker was then chosen to lead the war party on the buffalo hunters. Parra-O-Coom died while the fighting raged and was buried on the banks of Elk Creek in 1874.

Kobay, "Wild Horse," succeeded Parra-O-Coom as "token" head chief of the Kwahadi. Kobay was killed during the second charge on the buffalo hunters at Adobe Walls in 1874.

By 1874, the Kwahadi shaman, Esa-tai, "Coyote Droppings" or "Hind End of a Wolf," had become a much needed messiah figure to the oppressed Comanche. Esa-tai was also known as the Wolf Prophet. His keen observation skills allowed him to predict weather patterns and other solar occurrences. After he correctly predicted the occurrence of an 1873 comet that would appear in the skies for five days and then be followed by a drought, the bands began to believe his power would deliver them from their white enemies. Esa-tai assembled all of the bands in early June 1874 to perform the Sun Dance. This sacred ritual of the Kiowa and Cheyenne had never been performed by the Comanche in their entire history as a people. Esa-tai used the Sun Dance to proclaim that a "great spirit" had instructed him to attack the hide hunters at Adobe Walls. The Wolf Prophet proclaimed that the hide hunters would all be killed in their sleep and no Cheyenne, Kiowa, Arapaho or Comanche warrior would be harmed because he would furnish them with magic paint that would deflect the copper bullets of the whites. After fifteen warriors were killed during the second charge, the assembled warriors realized that Esa-tai's "puha" was flawed. Wilbur Nye wrote in his book, Carbine and Lance, that sixty years after the battle, Esa-tai was simply known by the Comanche as "that comical fellow."

Lone Star Writer
I am a retired high school English / Reading teacher, and a Texas History enthusiast. I am also the author of the Free Anderson/Parks Scott trilogy available through Dorchester / Leisure Books. The Road to a Hanging (2006) Ride the Desperate Trail (2007) Ambush at Mustang Canyon (2007). My third book, Ambush at Mustang Canyon was a 2008 Spur Award Finalist. My novel, A Hundred MIles to Water, was awarded a Will Rogers Medallion in 2011 for Best Fiction. My latest work, Texas Tales Illustrated, published by TCU Press is now available through your favorite book source